Can you identify these suspects?

The Kelowna RCMP is asking for the public’s assistance in identifying suspects involved in a robbery of a gas station on Springfield Road.

On November 22, 2021 at 11:30 p.m., two suspects, one male and one female, entered a gas station on Springfield Road. The male suspect threatened the employee with a knife and robbed the store while the female suspect stood watch.

This is the second time in a week this gas station has been robbed. The previous robbery occurred on November 15, 2021 at 1:08 a.m. During this incident, two male suspects entered the store and one of the suspect’s threatened the employee with a pipe.

Police are investigating a possible connection between these two robberies.

The male suspect involved in the robbery on November 22, is described as follows: 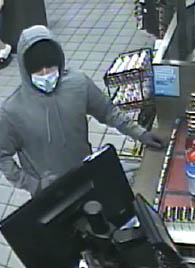 The female suspect involved in the robbery on November 22, is described as follows:

In both incidents, the suspects fled the store on foot toward Cooper Road with an undisclosed amount of cash and merchandise.

Investigators are hoping that by releasing the video of the robbery on November 22, it will lead to the suspects being identified.

With the holiday season approaching, the Kelowna RCMP is encouraging businesses to implement extra security measures to protect their stores and their employees, said Cpl. Tammy Lobb. Gas Stations, liquor stores and cannabis stores have been the target of robberies during the month of November.

The following is a list of Holiday Security Tips for businesses:

The investigations into the robberies at the gas station are ongoing and are being led by the Kelowna RCMP General Investigative Services - Robbery Unit. Anyone with any information on or who may have witnessed this incident is asked to contact the Robbery Unit by emailing E_Kelowna_General_Enquiries@rcmp-grc.gc.ca  or remain completely anonymous by calling Crime Stoppers at 1-800-222-8477 or by leaving a tip online at www.crimestoppers.net