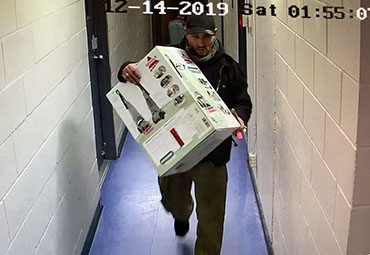 View a high-resolution image: Suspect one is a man who appears to be Caucasian and may be in his thirties. In this video still, he has a narrow nose, with close-set eyes, beard stubble, and is wearing all-black clothing including a black baseball cap 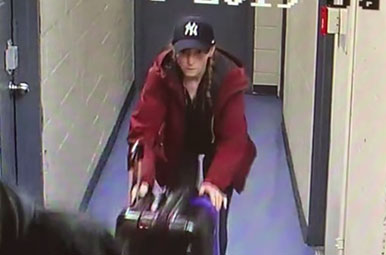 View a high-resolution image: Suspect two is a woman who appears to be Caucasian and may be in her thirties. She has long brown hair worn in two braids, a narrow face, and is wearing a red jacket and a New York Yankees baseball cap

A five-month investigation into the break and enter of dozens of storage lockers has not yet identified the suspects, but help from the public might prove the key to solving this crime.

The break and enter was first reported to Coquitlam RCMP on December 14, 2019. Over the next several days, it was discovered that thousands of dollars worth of belongings had been stolen from approximately 20 lockers within the same apartment complex in the 3000 block of Guildford Way, Coquitlam.

It’s unusual to see this many storage lockers broken into at the same time, and as a result a lot of people have been victimized, says Corporal Michael McLaughlin with Coquitlam RCMP. But the quality of this security video is very good, and there’s a good chance someone is going to recognize these suspects and provide the key that will solve this crime.

If you think you recognize either of the suspects, call the Coquitlam RCMP non-emergency line at 604-945-1550 and ask for Constable Amarveer Ark (file 2019-37603). If you wish to remain anonymous and possibly collect a reward, call Crimestoppers at 1-800-222-8477 or go to their website at www.solvecrime.ca.