On September 21, 2020 at approximately 10:55 p.m., the Kamloops RCMP was called to a local pizza business in the 800-block of Columbia Street who reported being robbed at gun point.

A lone suspect entered the business, approached one of the employees who was working at the till and pointed what looked like a firearm towards him, asking for the money from the register. The employee complied, and the suspect grabbed an undisclosed amount of money before leaving the scene. He was last observed heading north on Columbia on a small bike. 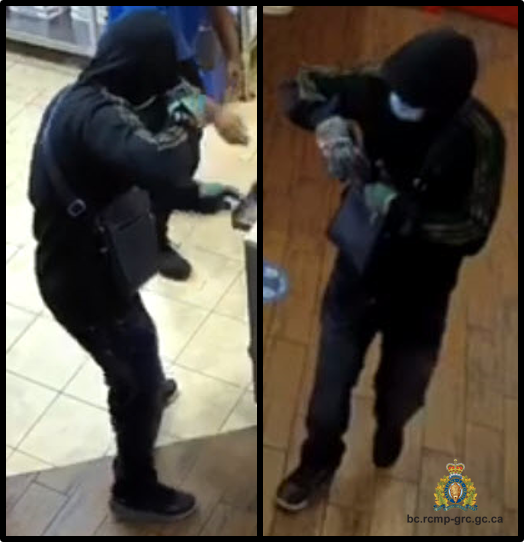 The male was described as Caucasian, approximately 5'4" tall. He was seen wearing a dark jacket with 3 lines from the shoulder to the wrists, a pair of jeans and a square black bag with a single strap (satchel style).

We are obviously taking this event very seriously, and hope that the pictures released will assist in identifying this suspect," said S/Sgt Mat Van Laer from the Kamloops RCMP. "The employee responded the best he could, and we are very happy nobody got hurt, adds S/Sgt Van Laer.

The Kamloops RCMP is asking for anyone with any information about this robbery to contact the detachment at 250-828‐3000.