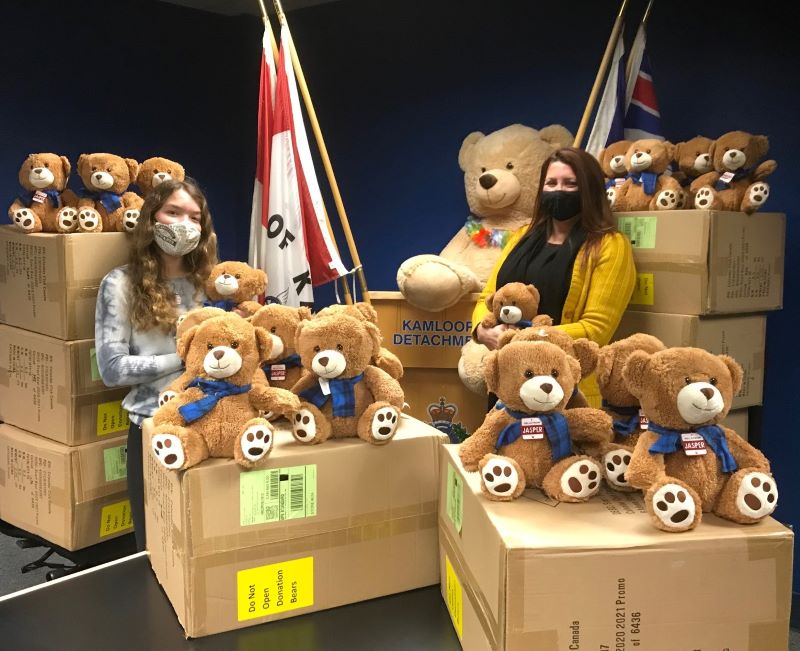 Almost 200 teddy bears will have an extra-special mission this year, thanks to a donation from Calendar Club to Police Based Victim Services.

On Tuesday January 5, staff from the Aberdeen location of the seasonal store attended the Kamloops RCMP Detachment to present nine boxes of trauma bears to Kamloops Police Based Victim Services (PBVS). The bears will be available for police and victim service workers to give to children and adults who have witnessed or experienced tragedy, said Kamloops PBVS Program Manager, Ula Chauret, who accepted the donation from Calendar Club employee Madison Kopytko.

Ms. Kopytko said one of her co-workers and friends received a bear from PBVS when she was a child and it really helped her in that moment.

I think it’s a comfort item for people, said Ms. Kopytko. It’s a token of a simple act of kindness.

Each of the nine boxes donated to PBVS contained 18 bears, which will be individually packaged in zipper bags and placed in police vehicles, allowing frontline officers to have them available to hand out as they respond to everyday tragedies. Victim service employees and volunteers will also keep a supply on hand for the people it helps by providing emotional services, crisis intervention, information on community resources, and much more.

Calendar Club has donated the bears to Kamloops PBVS for numerous years, something Ms. Chauret said is very appreciated.

The bears were made possible through a donation from Calendar Club and its local customers. Along with finding a home in PBVS, a shipment of bears also went to Christmas Amalgamated.