No insurance file leads police to a motel drug bust

A vehicle with mismatched plates led to Kamloops RCMP officers executing a warrant and seizing thousands of dollars in cash and drugs yesterday.

Members of the Kamloops RCMP’s Crime Reduction Unit (CRU), Targeted Enforcement Unit (TEU), and the Southeast District Emergency Response Team (ERT), joined together February 9 for the quick execution of a search warrant at a Kamloops motel, which ended with the seizure of approximately five ounces of suspected cocaine, 3.6 ounces of suspected fentanyl, and thousands of dollars in cash. 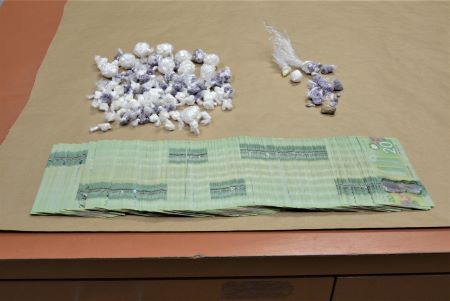 The investigation that led to the bust started earlier that day, when a member of the Crime Reduction Unit arrested a man for driving without insurance on the 1500-block of River Street. The man resisted arrest, but a civilian nearby came to the officer’s aid, allowing him to handcuff the suspect. A search following the arrest led to the discovery of a quantity of drugs.

Due to the high-risk nature of the drug trade and the potential threat to officer and civilian safety, Kamloops RCMP requested the assistance of ERT to help ensure the environment remained as safe as possible during the execution of the search warrant, which occurred around 10:45 p.m. at the Riverland Inn and Suites motel.

Even in the very initial stages of this investigation, police were met with resistance, illustrating how quickly risk can escalate when dealing with those involved in the illegal drug trade, said Simon Pillay, Staff Sergeant of the Kamloops RCMP Serious Crime Unit.

In this case, kudos to the civilian who recognized what was going on and came to the officer’s assistance, Staff Sergeant Pillay added. Thanks to that initial arrest, the officer’s safety was maintained and he was also able to uncover evidence which led to our CRU and TEU teams obtaining and executing a search warrant. That warrant ended with police removing a substantial amount of drugs and cash off the streets and out of the drug trade.

A 19-year-old man from Mission was arrested and later released. The investigation is ongoing.

Anyone with information which may assist in this investigation is asked to please call Kamloops RCMP at 250-828-3000.