RCMP Police Service Dog (PSD) Denim is once again being hailed a hero, after he and his human counterparts quickly located an elderly gentleman, whose All-Terrain Vehicle (ATV) suddenly left the man stranded in the Stropky Road area. 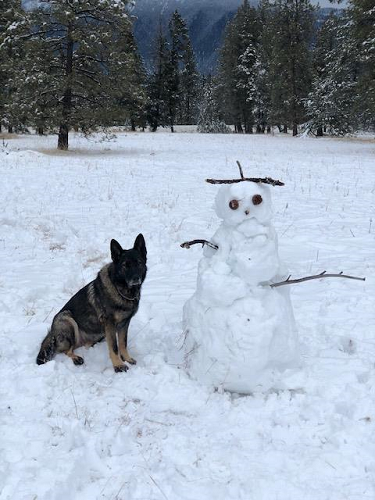 On February 3, 2021 at around 4:30 p.m., Cranbrook RCMP received a 9-1-1 emergency call reporting that an elderly gentleman had been quadding in the Stropky Road area, when his ATV suddenly became stuck in the snow and he was unable to make his way out of the area, back home to safety.

The man’s spouse attended the area in an attempt to either help get the quad out, or walk him out of the area herself. Unfortunately the two were unsuccessful and the pair, both of whom in their mid-80s, eventually called the local RCMP for assistance.

With darkness falling and the temperatures plummeting in the region, front line officers recognized that the need to reach the elderly couple was dire, states Cst. Katie Forgeron, spokeswoman for the Cranbrook RCMP. The man’s wife, who was beginning to experience symptoms of hypothermia, used her emergency whistle to help guide searchers to their location. With PSD Denim leading the charge, those police officers were able to quickly locate the couple and escort them to safety.

Thankfully neither the man, nor the woman required any medical assistance, the couple just needed time to warm up. Despite having some essential supplies, the pair were not prepared to spend the night outside in the frigid conditions. 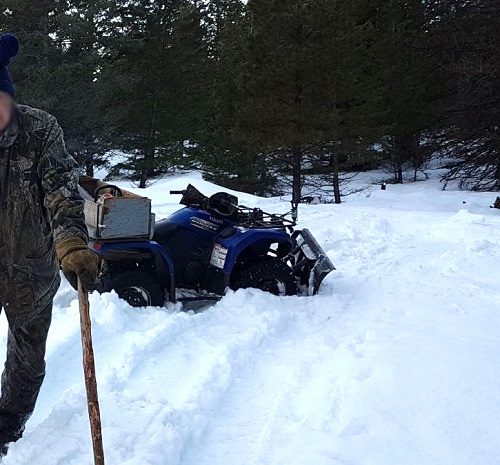 View larger image: The elderly man standing in front of his quad stuck in the deep snow in the background;

Three of the responding police officers worked together to lift and reposition the ATV, so that it could be removed from the area.

Our officers were so pleased that they were able to reach the couple before night fall and hypothermia could fully set in, one even claiming this is the kind of calls they signed up for. The elderly couple expressed their admiration at the police response time and their appreciation to the officers, with a special invite to join them for bacon and eggs, adds Cst. Forgeron.