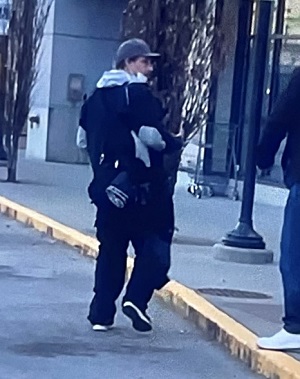 The Nanaimo RCMP is asking for the public’s assistance in identifying the man shown in the attached photo. It is alleged that during an altercation with another man, the suspect produced a knife and stabbed the individual. The incident occurred at approximately 8 pm on Thursday April 1, 2021, in the vicinity of the Pantry restaurant, located at the Port Place Mall. The suspect fled prior to police arriving on scene.

The victim’s injuries were minor in nature. The victim was however transported to the Nanaimo hospital where he was treated and later released. Police attended and spoke with several witnesses and the victim. Investigators determined that there was an exchange of words between the suspect and victim which ultimately lead to the altercation.

The picture provided of the suspect was taken by a bystander shortly after the incident. The suspect is Caucasian, approximately 6 ft. 1, brown/blonde hair and was wearing a dark jacket and baseball cap. He was carrying a white/black backpack. The suspect was described as having discoloured yellow teeth. The knife used was produced from a sheath and is described as being old and rusty.